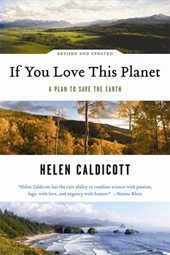 “Helen Caldicott has the rare ability to combine science with passion, logic with love, and urgency with humor.” — Naomi Klein.

From the leader and spokeswoman of the antinuclear movement comes a revised and updated edition of this groundbreaking, widely acclaimed classic.

Exploring dangerous global trends such as ozone depletion, global warming, toxic pollution, food contamination, and deforestation, Helen Caldicott presents a picture of our world and the forces that threaten its existence.

As always, she gives a prescription for a cure and cause for hope, rallying readers to action with the contention that our fight for the planet will draw its strength from love for the Earth itself.

“Caldicott’s role in the movement has always been to ring the alarm bell, and her charisma remains undimmed. … The doctor is in.” — East Bay Express

“Helen Caldicott has been my inspiration to speak out.” — Meryl Streep

If You Love This Planet

A Plan to Heal the Earth

“Helen Caldicott has been my inspiration to speak out.” Meryl Streep

Our planet is desperately ill and must be healed. If the human race does not change its present behavior, the ecosphere may be doomed within the next ten years. A renowned anti-nuclear activist for twenty years, Helen Caldicott here turns from the arms race to the race to save the planet, laying out the grim details of ozone depletion, excess energy consumption, pollution, and global warming. The causes: public apathy, corporate greed, and the cynical manipulation of political leaders.

To save the planet we need to change the way we think and behave. Closer contact with, and appropriate reverence for, nature will help to provide simple answers to seemingly complex problems.

Caldicott, a physician by training, also gives us a prescription for cure – and a cause for hope. We must learn energy efficiency, we must organize politically (voting, she suggests, should be compulsory), and we must hold corporations and governments accountable for their actions. Above all, she says, our fight for the planet will draw its greatest strength from a love for the Earth itself.

1 thought on “If You Love This Planet”