Certain that the White House’s War on Terror is escalating the global nuclear arms race, she embarks on an explosive crusade across post 9/11 USA, armed with her fifth book, The New Nuclear Danger, and a furious determination to rally the American people against Star Wars and the new nuclear weapons labs before it is too late.

Tagging along is Caldicott’s jaded niece, filmmaker Anna Broinowski, a post-punk fatalist who believes that nukes are inevitable – and wonders whether a straight talking dissident like Helen really can make a difference in George W. Bush’s ‘Land of The Free’.

Set against the volatile backdrop of the Afghanistan and Iraq invasions, Helen’s War tracks Caldicott’s roller-coaster tour as she vies with spin-savvy neo-conservatives for airtime, courts celebrity backers for her DC think-tank and battles to stop the bombing of Baghdad. We discover the vulnerable, humorous, passionate woman behind the crusade … and what it really costs to fight for Peace (description from Ronin Films). 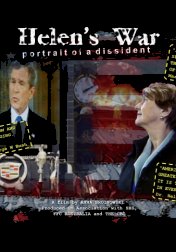