Anti-nuclear activist Dr Helen Caldicott once gave the then US president Ronald Reagan a piece of her mind during a meeting in the White House.

“He was the worst immigration minister in our history. He was cruel, absolutely cruel,” Dr Caldicott told the crowd.

“The Labor party set up bringing people on islands, when they came by boats,” she said.

“Our annual intake of refugees I believe is 20,000 people if they come by plane. I don’t understand it. We allow those who fly in but treat those who can’t afford to fly so poorly.

“They shouldn’t be coming with people smugglers and drowning in the boats. If they want to come, we should set up a situation in Indonesia where we process them and we fly them over.”

She added Australia’s “mostly scientifically and medically illiterate politicians” were in for a shock.

“We ain’t seen nothing yet,” Dr Caldicott said. 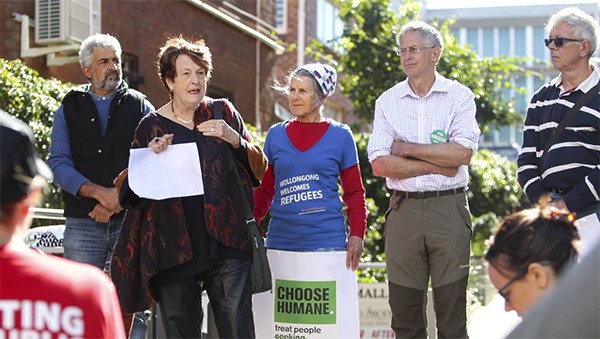 “As we export our coal and the climate warms up and the oceans are rising….there are millions of refugees still to come trying to escape to higher ground.”

RAC spokesperson Stephen Spencer hoped this would show politicians there was widespread public support for the Refugee Council of Australia-developed ‘Platform for Change’.

The platform calls for ending offshore detention; creating a fair process for people to seek asylum in Australia; ending mandatory detention; increasing our refugee and humanitarian program; and improving our engagement in Asia.

“Whoever wins the election is going to have to resolve the humanitarian crisis on Manus and Nauru,” he said.