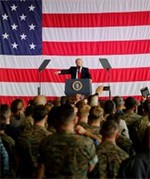 In 2015, ninety-two American missile officers were suspended because they had been cheating, taking drugs, or sleeping in the missile silos. These men are employed to guard and to operate 150 nuclear missiles at F.E. Warren Air Force Base in Wyoming which constitutes one-third of the 400 Minuteman 3 missiles that stand “on hair trigger alert” 24 hours a day in silos which are scattered across the northern Great Plains.

Two officers aged between 22 and 27 are in charge of each missile silo, and each man is armed with a pistol to shoot the other if one shows signs of deviant behaviour.

The missile silos are equipped with antiquated equipment including floppy disks and telephones that often don’t work. Each Minuteman 3 missile contains three hydrogen bombs, almost 50 times the explosive power of the Hiroshima bomb. The officers in charge of these deadly weapons are clearly expected to follow strict behavioural standards at all times.

During the investigation, fourteen airmen had allegedly been using cocaine. Other drugs involved were ecstasy, cocaine, LSD and  marijuana.  All in all roughly one hundred officers were involved in the cheating scandal in 2015 and 2016.

Airman 1st Class Nickolos A. Harris, said to be the leader of the drug ring, testified that he had no trouble obtaining  LSD and other drugs from civilian sources and he pleaded guilty to using and distributing LSD plus ecstasy, cocaine and marijuana.

A side note – because LSD had showed up so infrequently in drug tests across the military, in December 2006 the Pentagon eliminated LSD screening from standard drug-testing procedures.

In more episodes of gross malfeasance, 2013 Vice Admiral Timothy Giardina, the head of the U.S. Strategic Command, was sacked for illegal gambling while Major General Michael Carey, a man in charge of all of the 450 intercontinental ballistic missile silos, was dismissed after a visit to Moscow when he became inebriated and insisted on singing in Russian night clubs, while cavorting with inappropriate women.

Considering all of these facts among many others, it is amazing to me that we are still here having not been incinerated in a global nuclear holocaust. Suffice it to say, we are in the hands of fallible men armed to the teeth with missiles and hydrogen bombs.