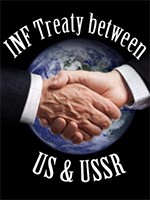 Some European allies want to make last ditch efforts to prevent the arms race that will escalate if the US government exits the Intermediate Nuclear Forces (INF) Treaty, Helen Caldicott, founder of the Nobel Peace Prize-winning Physicians for Social Responsibility told Sputnik.

Russian President Vladimir Putin and German Chancellor Angela Merkel in a phone conversation on Monday exchanged views on the situation in the area of strategic security in light of the Trump administration’s ultimatum to exit the INF deal in 60 days if Moscow does not comply.

“If the US leaves the treaty as proposed by the wicked [US National Security Adviser] John Bolton, that action opens the way for an unrestrained arms race not just with Russia but also China and many other countries,” Caldicott said.

Caldicott said Merkel during her recent trip to the United States likely tried to persuade President Donald Trump to stay in the INF treaty. The peace activist warned that ending the INF would lead to an unrestrained nuclear arms race including across the Middle East and Asia.

Last week, after the United States announced its INF ultimatum, NATO leaders said the alliance was already preparing for the deal to be terminated.

Moscow has repeatedly refuted US allegations that Russia has violated the 1987 INF treaty, which bans ground-launched ballistic and cruise missiles with ranges between 500 and 5,500 kilometers (311 to 3,417 miles). Moscow has complained that launchers on US defense systems in Europe can fire cruise missiles at ranges that violate the INF’s terms.

Physicians for Social Responsibility (PSR) is the largest physician-led organization in the United States working to protect the public from the threats of nuclear proliferation, climate change, and environmental toxins. It has 50,000 members.