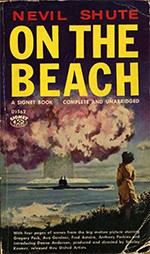 I recall in the early ‘80s when Jonathan Schell’s book “The Fate of the Earth” came out, long after “On the Beach” had cinematically addressed the same grisly subject of a nuclear holocaust in an era of bomb shelters and such.

And I remember (from the ‘80s) Schell telling us that only certain insects would survive such a horrendous catastrophe.

There is debate on that, but we’re still speaking of something essentially unspeakable here, as he was: of nuclear war, and basically, the end of things known. Yet for some reason, this whole issue doesn’t seem to be as central today as it was for Schell back then, when the main threat (before staggering, ultra-dangerous proliferation) was of a Soviet-American conflict.

Neither Schell nor Helen Caldicott (also a key nuclear warner of the ‘80s) would be as widely read in our period. Many of today’s millennials working, then eating and swilling in Manhattan, New Orleans, and the rest just want to live in the moment. They want to have that good craft beer and those ribs now, and hear loud music, too. For a lot of them, tomorrow doesn’t seem to matter so much.

But to let this group off the generational hook, many others have had that same attitude in history, not simply America’s millennials. For some reason in this context, I think less of Schell’s or Caldicott’s warnings, or even the horrors of Hiroshima, and more of other events in history. One of these doesn’t include the possibility of nuclear war (nukes were still a few years away), but amply shows the presentist blindness of we humans.

I’m talking of Paris about May 8 or 9, 1940, which somehow obsesses me as an example of human myopia. I’m thinking of French people filling the boulevards in fine spring weather, having outdoor espressos and just savoring a new season. And relishing, too, the fact that while WW II had started Sept. 3, 1939, leading to the rapid fall of Poland, it hadn’t yet reached Western Europe.

So French soldiers sat in their expensive Maginot Line, and many in the country subscribed to the theory of a “phony war,” or in their language, “drôle de guerre.” The idea being that after some eight months of a putative Second World War, there was no real pain here! No true threat! I can still have my espressos or stroll under the chestnut trees and enjoy remained a general sentiment. Things somehow (maybe magically) wouldn’t change, or so too many thought.

I guess lots of us today also hope that the good times will always roll. Human illusion being such a vast, almost oceanic thing, right? But what the average Frenchman (plus Belgian or Brit) didn’t know back then was that Hitler had already called off invasions in the West over 20 times through the harsh winter of 1939-40, awaiting surer weather for his aircraft and especially, his superb tank divisions with which to wage blitzkrieg.

Moreover, many (including in the States) felt that France was invulnerable anyway. And then, starting May 10, 1940 all illusions were blasted, and quickly. The Germans punched right into France, and within a month or so, Paris was a Nazi city, and not nearly so happy and full of illusions as was previously the case. Few had seen this debacle coming, but come it finally did. Many heads had been in the proverbial sand, and you obviously don’t learn much that way.

To return to our nuclear theme, I do think we’re at least somewhat in a similar boat, only this time the stakes are infinitely higher. Just think of the vulnerability alone of Seoul, and a good 10 million inhabitants there! Or of New York! Or L.A.! It all beggars the imagination, but if we don’t try and face the consequences of nukes, including the “suitcase” type, landing in bad hands, sooner or later we may all suffer abominably.

And in ways that defy dispassionate description, words, or reason itself. The insects that might somehow survive would behold figurative handwriting still on the walls, which many humans had long ignored. Including that provided by a North Korean dictator some laughed at, as people had once laughed at Adolf Hitler.

3 thoughts on “Thinking the Unthinkable”